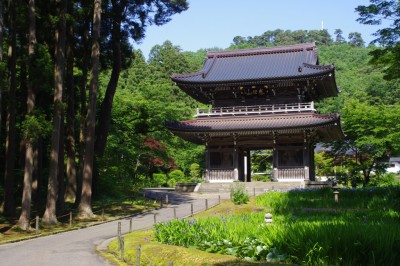 Uesugi Kenshin is very famous general in warlike ages in Japan, especially in this Joetsu area. He foufht not for a desire, but for right. He believed the god of treasure, his picture of flag came from Bishamonten,also he was called the dragon in Joetsu.he didn't have a wife.There are many must see spots to know Uesugi Kenshin.

recomendation to visitEchigo Joetsu Uesugi Omotenashi bushotai group is expecting to see you.

A facility that researches, stores and displays archaeological artifacts in Joetsu City. In addition to exhibitions related to the city's history, you can see the organizing and restoring work of the excavated items from the large window of the research room. Located at the foot of the Kasugayama Castle Ruins, it is a Japanese-style building with an earthen wall color that blends well with the surrounding rich nature.Currently, an exhibition organized by the Kenshin Ko no Sato group entitled "Echigo Joetsu Kenshin Uesugi and Kasugayama Castle" is being held at the center. The exhibition focuses on Kenshin Uesugi, a famous warrior from the Sengoku Era and his castle Kasugayama Jo. 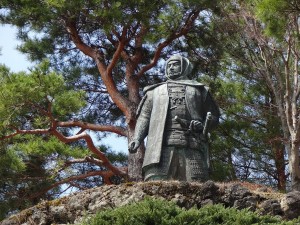 about 0 minutes on foot

This shrine was originally home to spirits taken from Yonezawa city in Yamagata Prefecture and enshrined here, where Uesugi Kenshin later worshipped.It was built in 1901 by Meiharu Ogawa, father of children's fairy tale writer Mimei Ogawa.It is said that the "father of the modern postal system," Maejima Hisoka, also assisted in the construction.The appearance of the straight and solid lines of the shrine building is spectacular.In the Memorial Museum adjacent to the grounds, Uesugi Kenshin's old relics, writings and personal items are on display.Further, visitors can see Ogawa Mimei's poem, "Like Clouds," ("Kumo no Gotoku") carved in stone, as well as several stone statues with a fairytale motif.

recomendation to visitthe tresure house is must-see, you can see the portrait of Kenshin and autograph

Nagao Tamekage, the grandfather of Uesugi Kenshin, had this temple built in the 6th year of the Meiou Period (1497) to morn for his father Shigekage.Here, from the age of 7 to when he was 14. Uesugi Kenshin spent his younger years under the strict tutelage of the famous monk Tenshitu Kouiku, Of the warlords of the Sengoku period, Kenshin is said to have been highly cultured and educated, with deep faith. His character is said to have been moulded during his stay here as a boy.Hori, who replaced Kenshin, also pursued buddist training here, and later protected Lord Takada.The gate ("Kaemon") which is a designated cultural asset of the city, is said to have been moved here from Kasugayama Castle. The mountain gate is a masterpiece of the Taisho Era, blending Japanese style design from the Kamakura period with Chinese design.Also, the plaque hanging here proclaiming "The Foremost Truth" ("Dai-ichi gi") is of Kenshin's own handwriting. (The plaque in view is a copy, while the original is preserved with other treasures elsewhere on the grounds).In the cemetery, the graves of Uesugi Kenshin and other heroes of the Battle of Kawa Nakajima can be found.

about 10 minutes by car