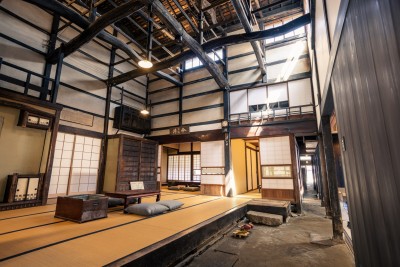 about 7 minutes on foot

In Meiji 44 (1911), this theater was opened as the playhouse "Takadaza," in the old city of Takada at Honcho 6 chome (the present address). After a few years, it was turned into a movie theater, and after 100 years, remains one of the oldest running movie theaters in Japan.Visitors can feel the nostalgic craftsmanship in the building itself. Aside from designated important cultural properties, features such as the masterpiece wooden ceiling in the main hall cannot otherwise be found in Japan. The projection room also is un-retouched and just as it was in the old days.As film projection shifted from actual film to digital video, film projectors disappeared around the country. In the belief that film projection is an art that should be passed down to new generations, film projected screenings are held several times a year. Furthermore, to preserve this skill, film projection seminars and tours of the projection room are also held.Sekai-kan theater is also registered in Japan as a tangible cultural property as well as a modern industrial heritage site. It is a valuable site for the cultural heritage of film in Japan, gaining the attention of movie afficianados throughout the country.

about 3 minutes on foot

The former Imai Dyeing Shop is a townhouse building ("machiya") representative of Edo era Takada townhouses, built in late Edo period . It is one of the oldest "machiya" type constructions still existing in Takada.Characteristically, the building is built low, and the gentle, sloping roof is representative of such townhouses in the Edo period. The "gangi" covered walkways are of the old fashioned "built-in" type.The valuable building retains much of it's original form, and it's former life as a dying shop can still be seen in its construction.City designated cultural property (august,2019)

about 17 minutes on foot

This is an ancient temple which was founded by Shinran.The remains of St. Shinran are interred in the main temple on the grounds.The main hall has been designated as a National Cultural Property. Treasures can be viewed with admission fee.

about 6 minutes on foot

"Ukiyo" is a restaurant that opened some 140 years ago, with a history dating back to the Edo era. It stands in the old castle town of Takada, rich in its history. Relax and enjoy the flavors of traditional Japanese cuisine in a setting that has been registered as a tangible cultural property. Enjoy the "Seasons of Ukiyo" to your heart's content overlooking the seasonal changes in the traditional Japanese garden.

about 5 minutes on foot

Takada Machikado Koryukan (formerly Takada branch of Daishi Bank) was built in 1931 and was the main office of 139 Bank. Special reinforced concrete was used in its construction making it unique for its time. The hall can be rented out for events and when not in use the building serves as a rest area and learning corner. In the exhibition room, you can learn about the characteristics of the building, the history of the bank, and the history of the Takada area at the time of construction.The building was designated as a Municipal Cultural Asset in March of 2019.

about 15 minutes on foot

This "candy shop" has been in business for some 390 years, since the Edo era, founded in the first year of Kanaga (1624).This shop has been producing and selling traditional syrup candies and bamboo candies from its location on the northern country town road, and is the oldest such candy shop in Japan.Syrup "mizuame" and candies made with agar gelatin from this shop were given by the master of Takada Castle as gifts during diplomatic missions.It is said that the candy's unique texture and long-lasting freshness spread via Edo (presently Tokyo) throughout the country.The famous author and playwrite Jippensha Iku, who wrote the famous comic novel "Tokaido Chuuhiza Kurige" is said to have visited here. In his work, Echigo Dochuki ・Kaneno Waraji ("Echigo Travel Jounal: the Golden Sandals"), awa-ame candies and the shop as is was in those days is introduced.This shop also features its famous sasa-ame ("bamboo candy") which appears in Natsume Souseki's novel "Bocchan."

about 9 minutes on foot