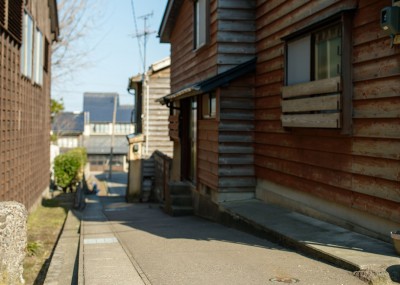 about 13 minutes on foot

Funami Park in Niigata Prefecture was developed as part of a project aimed at reviving the popularity of the prefecture's rich sandy beaches and coastal areas. Enjoy the breeze off the ocean as you stroll along the waterside. In the summer, have fun in the water and enjoy the beach next to the park.

about 1 minutes on foot

The story of Anju and Zushiou Maru is known far and wide from the Nou Drama song "Baba Shouten," the ballad drama "Sanseu, Tayuu" and Mori Ougai's story, "Sanshou Dayuu." The bridge "Ouka no Hashi" no longer exists, so this memorial tower was constructed near the Arakawa Bridge. In March of Showa Year 62 (1987), the tower was moved to its current location due to river enhancements.

about 2 minutes on foot

In September of 1888, this former Bank of Naoetsu was established as a savings institution under the name of "Naoetsu Sekijin Kinkou," with capital of 100,000 yen.The bank buildings were purchased from the head of a shipping business, Yamazawa Yorozaru (the former foreign minister Yoshizawa Kenkichi's father), in about Taisho Era 7 (1918). The buildings were later moved to the present address of Chuo 3-chome, where it operated until recently.The appearance of the remaining building is an irregular pentagon featuring three small roofs with white tiles on the outer walls. There is a large firewall surrounding of red bricks surrounding the buildings, within which is the large safe in use at the time, a wooden counter, and a German-made ceiling fan and a wall clock left as they were years ago.Finally, in front of the building stands a powerful lion statue, which at the request of Takahashi Tatsuta was produced by Ogawa Yuhiro of Kashiwazaki City, as a replica of the lion statue in front of Tokyo Mitsukoshi department store.

about 2 minutes on foot

The morning market in Naoetsu was started by the youth association Shimbashi-ku, as the area was known at the time. When the market started in 1911, it was held on days containing a "5" and "9", but the following year the days were changed to "3" (san) and "8" (pachi).There are no "gangi" awnings as in Takada, so the market enjoys a wide open feeling due to the wide street.The street itself runs to the ocean, and is fondly called "Sanpachi Street" after the days the market is held.There are shops and stalls filled to the brim with vegetables and groceries, dried foods, unusual seafood and processed items, as well as fresh fish fired locally.

about 17 minutes on foot

Fuchu Hachimangu (Shrine of the God of War)30min. to stay

The ancient and historical Fuchu Hachimangu Shrine is set in the northeast of the Kasugayama Castle ruins, secluded to the north of the museum.Beginning with Uesugi Kenshin, this shrine has been revered by lords of the past, and remains one of the main shrines in Echigo (Niigata).During the Warring States period (Sengoku Jidai), Naoetsu was the most prosperous fuchu (prefecture) in all of Echigo (Niigata).More than 380 years have passed since this shrine was built by the lords, and although the shrine was destroyed by fire during the turbulence of the times many cultural properties and valuable artifacts are left intact.Within the grounds there is presently a wide park area, which is treasured by the local residents as a recreation site rich with water and green nature.