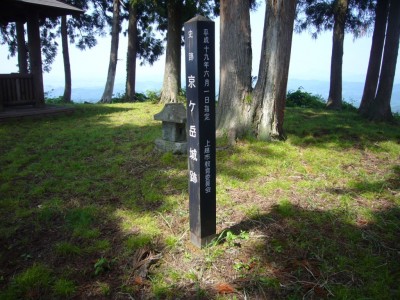 The Kyougatake Castle ruins are 520 meters above the shores of the legendary lake, Bouga ike.In these ruins, classic features from medieval mountain castles such as empty moats ("horikiri"), built up earth foundations ("dorui"), residence remains, cut land, vertical moats and others have been left in nearly perfect form. Because of the scale of the remains and the interiors, it is said to be typical of the period.During the Sengoku Period (15th~16th centuries), this castle played a supporting role for Kasugayama Castle, defending from the Shinano region and acting as a check point.

about 60 minutes by car

about 20 minutes by car