tour of history and culture in Takada 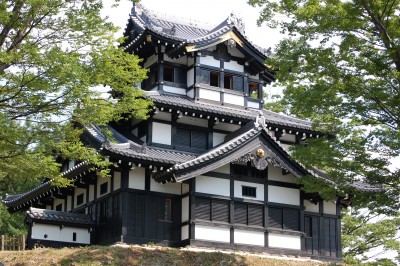 about 7 minutes by train

about 7 minutes on foot

This old "machiya" or townhouse, called "Old Kotsumaya," was built in the Meiji era, but was refurbished and recreated to make this public space. You can visit the atrium and storehouse, which are the features of old townhouses in Takada.Admission is free, so please feel free totake a look around the place. It serves also as an information office and a rest area in the center of the castle town of Takada. Please take note that during events or functions, some areas of the facility may not be available for viewing.Some sweets, tea, sake, and more are for sale at Gallery１（Gallery Mise). Welcome here,

about 1 minutes on foot

In Meiji 44 (1911), this theater was opened as the playhouse "Takadaza," in the old city of Takada at Honcho 6 chome (the present address). After a few years, it was turned into a movie theater, and after 100 years, remains one of the oldest running movie theaters in Japan.Visitors can feel the nostalgic craftsmanship in the building itself. Aside from designated important cultural properties, features such as the masterpiece wooden ceiling in the main hall cannot otherwise be found in Japan. The projection room also is un-retouched and just as it was in the old days.As film projection shifted from actual film to digital video, film projectors disappeared around the country. In the belief that film projection is an art that should be passed down to new generations, film projected screenings are held several times a year. Furthermore, to preserve this skill, film projection seminars and tours of the projection room are also held.Sekai-kan theater is also registered in Japan as a tangible cultural property as well as a modern industrial heritage site. It is a valuable site for the cultural heritage of film in Japan, gaining the attention of movie afficianados throughout the country.

about 25 minutes on foot

The castle was built in 1614, but burnt down in 1870. So this symbolic three-story-turret was rebuilt in 1993 as a memorial project for the 20th anniversary of the establishment of Joetsu city. When it was rebuilt, architects reviewed ancient pictures and did detailed research with paleography and further excavation, since the castle is one of the designated historical sites in Niigata prefecture. The size is almost full-scaled according to the 'Takada castle blueprint' drawn when Inaba Masamichi was the feudal lord (around 1685), and the exterior of the building was completed with reference to 'Honmaru Goten Ezu (The picture of the dungeon)' drawn when Matsudaira Mitsunaga was the lord (around 1624). In the turret, the 1st and 2nd floors have exhibitions of materials of Takada castle, and the 3rd floor has an observatory where you can enjoy a panoramic view of Takada city.

The Takada clan was abolished in 1871 by the Meiji government's abolition of feudal domains and establishment of prefectures act. The vassals of Yasumasa Hanso Sakakibara, which are said to be the Tokugawa Four Heavenly Kings, are enshrined here. The shrine widely solicits donations. The Sorin museum on the shrine grounds exhibits Sakakibara generational relics.

The Former division commander's residence was built in the year of Meiji 43 (1910) by the request of the Former Japanese Army Takada 13th Division Director, Nagaoka Gaishi. It is one of the few western-style wood buildings from the Meiji era that remain intact in Joetsu.Until 1991, the residence was used as a dormitory for the Self-Defence Force unit in Takada, but based on its value as Meiji era, Western-style architecture, it was moved and reconstructed on its present site.Based on records of the time, the residence has been restored as closely as possible to its original form, from the construction of the exterior and interior of the building itself, to the interior furnishings and design as well.

about 10 minutes on foot

This "candy shop" has been in business for some 390 years, since the Edo era, founded in the first year of Kanaga (1624).This shop has been producing and selling traditional syrup candies and bamboo candies from its location on the northern country town road, and is the oldest such candy shop in Japan.Syrup "mizuame" and candies made with agar gelatin from this shop were given by the master of Takada Castle as gifts during diplomatic missions.It is said that the candy's unique texture and long-lasting freshness spread via Edo (presently Tokyo) throughout the country.The famous author and playwrite Jippensha Iku, who wrote the famous comic novel "Tokaido Chuuhiza Kurige" is said to have visited here. In his work, Echigo Dochuki ・Kaneno Waraji ("Echigo Travel Jounal: the Golden Sandals"), awa-ame candies and the shop as is was in those days is introduced.This shop also features its famous sasa-ame ("bamboo candy") which appears in Natsume Souseki's novel "Bocchan."

about 10 minutes on foot

about 4 minutes by train